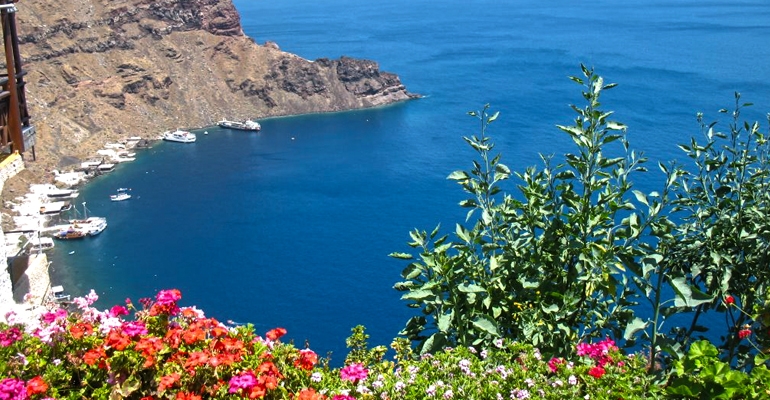 Thirasia is a beautiful island, opposite Santorini which you can visit covering a distance of 15 minutes from Oia.

Thirasia is the "miniature of Santorini", which however because of the limited construction and tourism manages to maintain its characteristics unaltered in time. You feel like you are traveling to another Greece, of the decade 1960-70. It is ideal for those wishing to enjoy a quiet and relaxing holiday,with their family, close to nature and a unique geological beauty environment.

The caldera of Thirasia is equally impressive as Santorini. Blacks cliffs and red rock formations that seem to have emerged from the sea, rising to a height of 350 meters from surface. At this altitude are built most of the houses of Thiras citizens that make up the hamlet of Manola.

The main settlements on the island are:
The Agrilia
It was the greatest and oldest settlement on the island until 1928.
Manolas
Considered the capital of the island and is built in the "brow" of the caldera. A picturesque village with narrow streets, traditional oven, an old grocery store and the church of Agios Konstantinos, from where you can enjoy magnificent views of Thera. There are the primary school, secondary school and high school.
The River
It is the first village you will see after Riva and was built in ravine. In the center rise the churches of Agios Dimitrios and Panagia Giatrissa.

You can also visit:
Riva
With several taverns and a beach with black sand and pebbles. From here by local bus or taxi you can go to other settlements. It has a fairly long beach with white sand and clear water that is not very deep
Kera
Located SE of Manola, high on the cliff, overlooking the Old Kameni and Nea Kameni. Even more impressive you look the scenery if you go up to the chapel of Prophet Elias.
Korfo
The old Therassia port where boats taking people from Athinios to the volcano take a stop. If you are already on the island, you can go down the steps to Korfos (270 in total). In Korfos you will find fish taverns. The Corfos Beach, next to the small harbor, located beneath the imposing black and red cliffs of the caldera in a spectacular setting. It is relatively narrow and consists of small black pebbles and the waters are clean and quite deep. Access to the beach can be done either by boat or by donkey or on foot going down some 200 large stone steps.