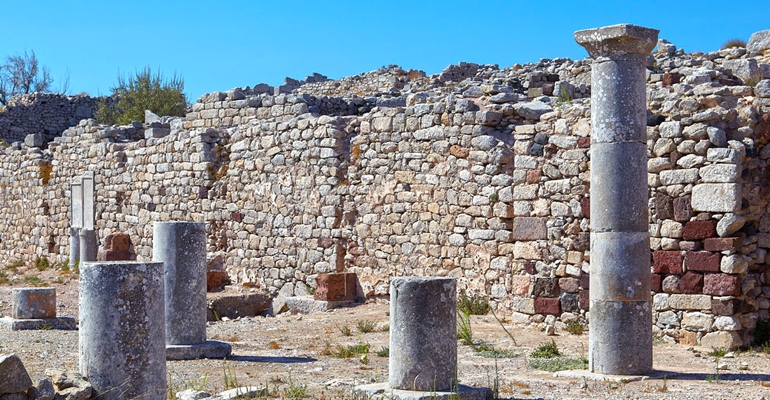 Located in the south-east of the island, is a real jewel, where you can see a complex of ancient constructions from the Hellenistic and Roman Period. The city was founded in the 8th century BC by the Spartans and was inhabited until the Byzantine period.

You can access the city by foot, with stairs on the mountainside. There you will find a complex of buildings from the Hellenistic and Roman periods.

The monuments of Ancient Thera:

The sanctuary of Artemidorus: the rocks are engraved epigrams, signs and symbols of the gods worshiped. It belongs to the 4th-early 3rd century BC charges
Royal Arcade: It has statues of the family of Caesar and inscribed plates
Agora: It is located almost in the heart of the city. It is divided into three sections. The southern part was the commercial center, the middle to the Governor and the north have arcade and monuments.
Temple of Dionysus: A small Hellenistic Doric temple of the 3rd century BC, dedicated to Dionysus
Cemeteries
Theatre: built in the Ptolemaic period (3rd century BC) and the 1st century AD conversions took part.
High school
The Area of Sanctuaries: it contains only open-air or covered sanctuaries, dedicated to Apollo Karneios, Hermes, Hercules, Ptolemy III, and others.. Here lies the square where celebrations were held to honor the Apollo Karneios.
Sanctuary of Apollo Karneios: It dates back to the 6th century BC and includes: the church square yard with an underground cistern and small building