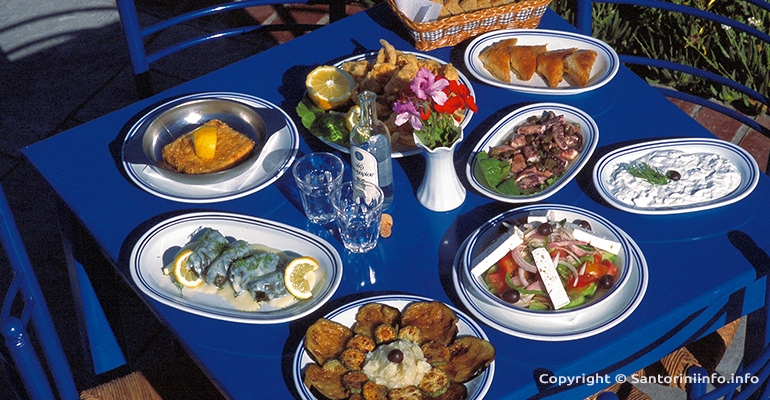 Perhaps the most gourmet of the Aegean island with a series of excellent local products and restaurants those showcase and give another dimension to the products and Greek cuisine.

Barley
Barley was one of the oldest crops in the island. Seeds and storage vessels have been found in the excavation of Akrotiri. Up until after the war, most of the people fed on barley bread or barley bread rolls, that had been kneaded and cooked every month due to lack in fire wood and use of vine branches and fig wood.

Fava
Santorini’s fava has huge taste difference from other ones. The former is much more full and sweet in flavor and more interesting texture. And this is not only due to the ground but also because it comes from a different variety, Lathyrus Clymenum, which has been found from excavations at Akrotiri , that was on the island for 3,500 years.

Tomato
The most famous and coveted product of Santorini. The rain-fed tomato Santorini has a little more thick-skinned than the classic tomato and cherry size. The quality of the grain is such that as good soil and found not to grow longer. Its unique flavor owes to the fact that it is watered, but merely morning moisture. In addition to salads, they use it to make tomato paste, jam, tomato, or make dried.

Capers
Both the leaves and the fruit of give special flavor to salads and sauces. It is popular in other Cycladic islands such as Tinos and Andros.

White eggplant
It has a sweet taste, very few seeds and not absorb much oil when fried. It comes from Egypt.

Cheese
It is produced in small quantities. It's fresh goat cheese with a creamy texture. It combines beautifully with the white wines of Santorini.

Katsouni
It is a tasty cucumber. If you do not cut in time, acquires melon flavor.

Crocus
The stigmas of crocus or saffron is collected on the island since prehistoric times. Saffron grows in two specific areas of the island, on the hill of the Archangel, Akrotiri and the hill of Gavrili, in Emporio. It Belongs to the species of Crocus called cartwrightianus, native plant of Greece that blooms from late October to early December.
Santorini today put crocus in various " Lampriana " buns and Easter’s melitinia.